By SILUMESI MALUMO
POLICE officers and foreign nationals stealing gold at Kasenseli will be dealt with according to the law, Ministry of Mines and Mineral Development Permanent Secretary Barnaby Mulenga has warned.
Mr Mulenga said Government would not tolerate any individual involved in illegal mining especially that gold had been identified to be a strategic mineral to help in improving the economy.
He said the ministry was not aware of the illegalities that had been involved in by police officers but it would be followed keenly by engaging the district administration so that the culprits can be brought to book.
Mr Mulenga reminded people involved in illegal gold activities that no one would be spared because they would be seen as criminals.
Recently Mwinilunga District Commissioner Arnot Mapulanga told the Daily Nation that some police officers had been conniving with foreign nationals to steal gold at Kasenseli.
Mr Mapulanga said two foreigners were arrested and were in custody awaiting court appearance but the officers they were working with escaped.
Mr Mapulanga said a manhunt had been instituted to bring to book the said officers.
He said the officers would be tracked through the phones which had been confiscated from the foreigners.
But Mr Mapulanga in an interview yesterday said those involved would be apprehended without fail.
Meanwhile Mr Mulenga said that tight security had been heightened especially in routes which were being used to steal gold at Kasenseli.
He said that the enforcement of the security was to secure the mineral which had been under threat.
“As a ministry we are not aware of police officers conniving with foreigners to steal gold but I think we shall engage the District Commission because he might have full information of what is transpiring at Kasenseli.
But I want to warn that those involved in illegal activities will not left scot free because they are depleting the resource which is meant to earn the country revenue,” Mr Mapulanga said. 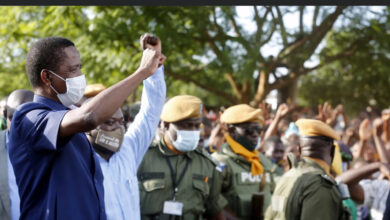